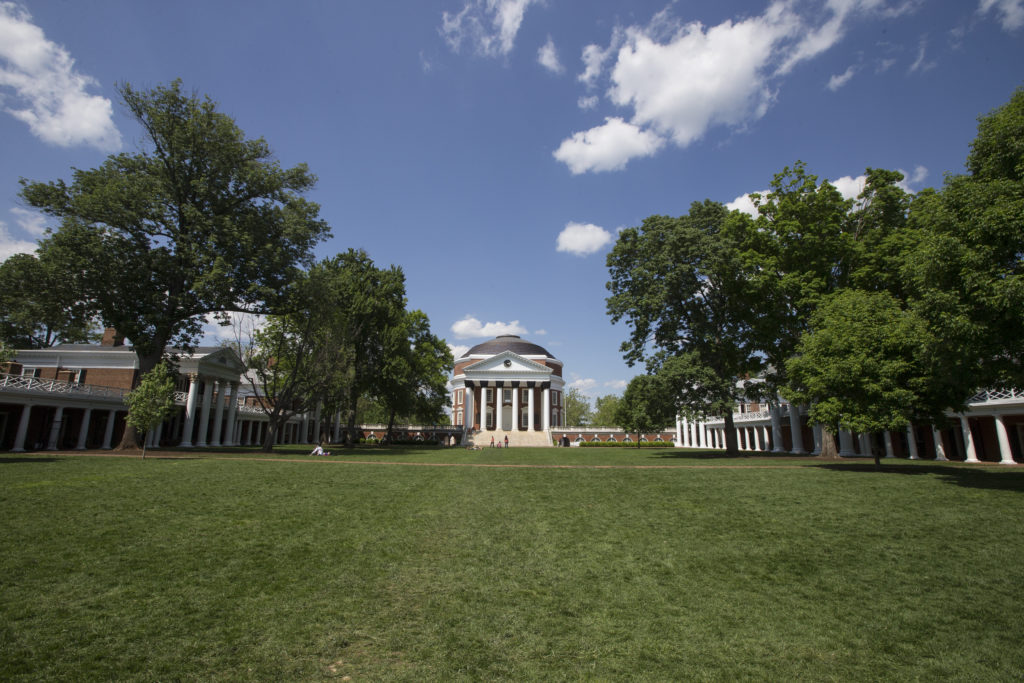 Each year, thousands of students and faculty members flock to the University of Virginia to learn and educate amongst this historic community. And each year they are joined by throngs of Thomas Jefferson enthusiasts, eager to marvel at the incredible architecture he employed to construct his beloved university. With both Greek and Roman classical influences, UVA features an eclectic mix of architectural styles that heralds Jefferson’s commitment to lifelong learning.

The design of “The Lawn,” which once constituted the entire University and still remains the heart of UVA, was carefully planned to accommodate a community of scholars and foster an environment of educational inquiry and discovery, one that continues to live on today. 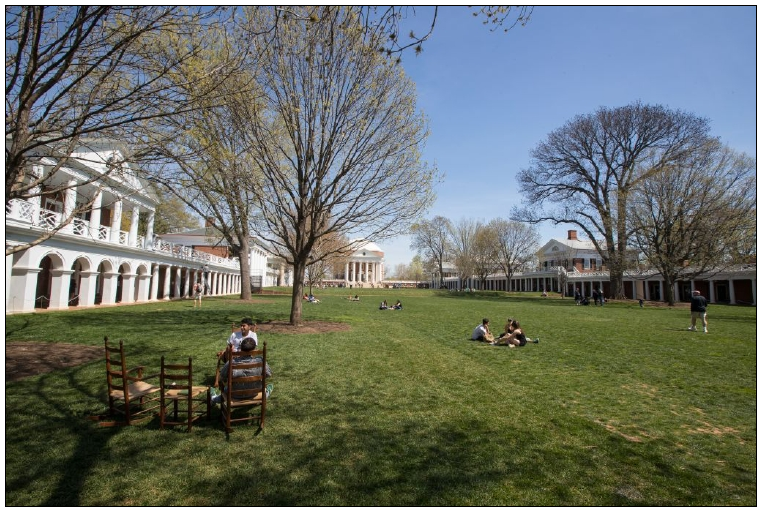 A self-taught architect who practiced in the classical tradition of architecture, Jefferson was heavily influenced by the work of Italian architect Andrea Palladio and his Four Books of Architecture (1570), which offered him classical design and construction rules. After designing and influencing many structures, including his personal home, Monticello, and the Virginia capital at Richmond, Jefferson was approached in 1816 to design UVA’s original grounds or the area of buildings still known as ‘The Lawn.’

Based on the rules of classical architecture, Jefferson’s design combined classrooms, dining halls, housing and utility spaces into a self-sustaining village. This approach of smaller buildings connected by covered walkways was polar opposite to the traditional academic structures being created under single roofs. Because disease and fire posed great threats to the single structures, Jefferson designed the first college campus containing smaller parts. 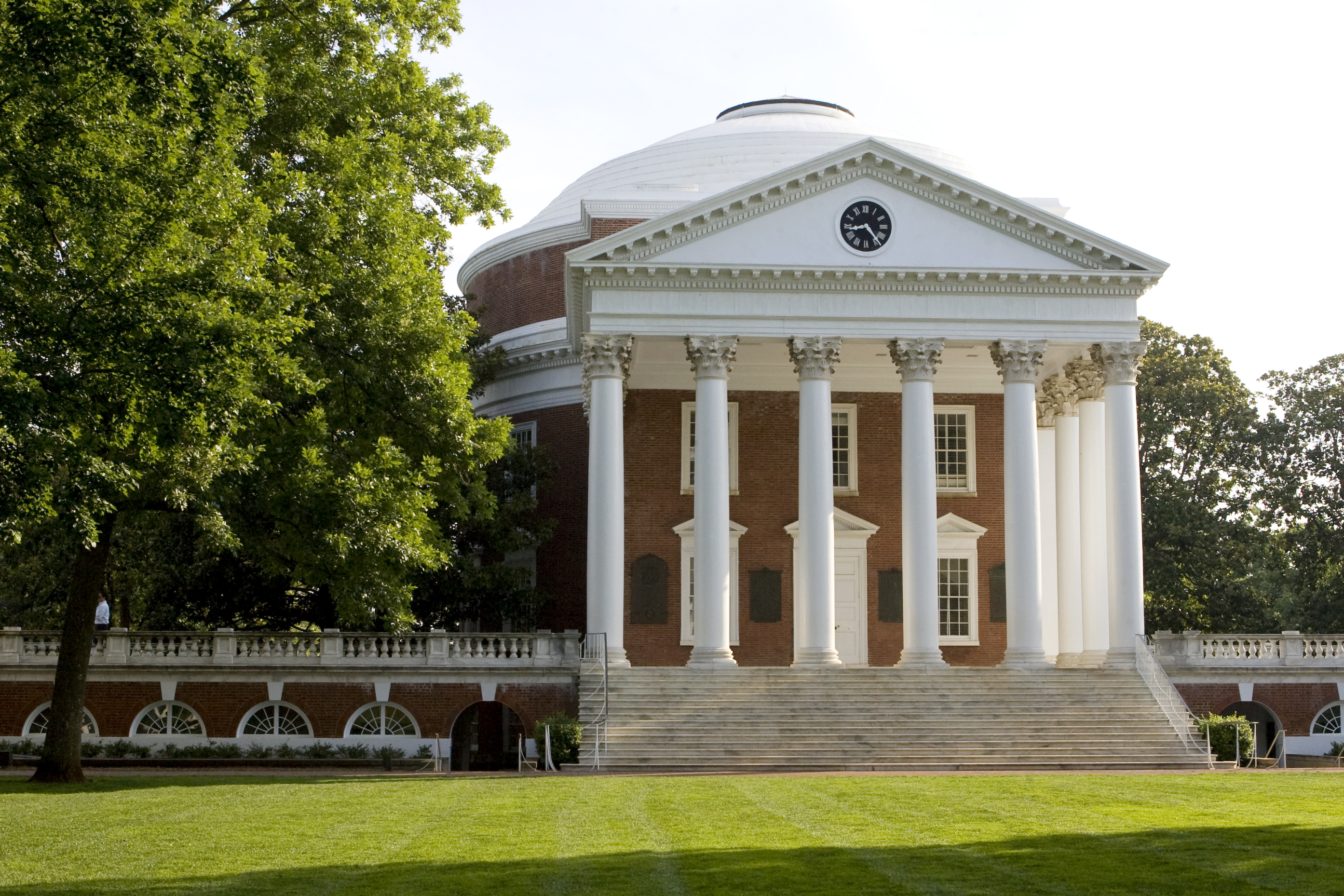 The north end of The Lawn at UVA features the Rotunda, the first library established at UVA and the symbol that has come to emblematize the University itself. When deciding on the design of the central pavilion for his Grounds, Jefferson took the advice of professional architects William Thornton and Benjamin Henry Latrobe when they suggested that he create a drastically different design for the center pavilion. The result was the now iconic Rotunda, which serves as a marker of Jefferson’s ingenuity and passion for architecture. 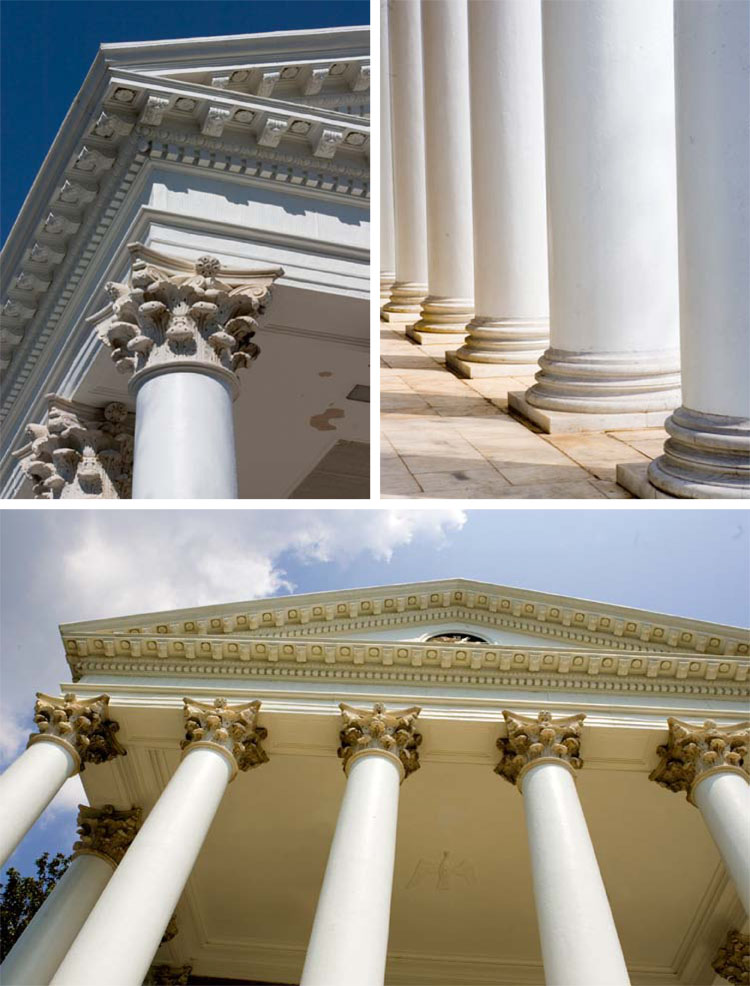 The Rotunda, which is based on the Roman Pantheon, indeed stands out, its grand 77-foot height dramatized by the presence of six towering columns. Ornately decorated using Ionic, Doric, and Corinthian motifs of classical Greek culture in addition to the Tuscan and Composite orders of ancient Rome, Jefferson chose to place a library at the center of University rather than a chapel, which was traditionally put at the heart of universities at the time, as a proclamation of his belief in the separation of church and State. 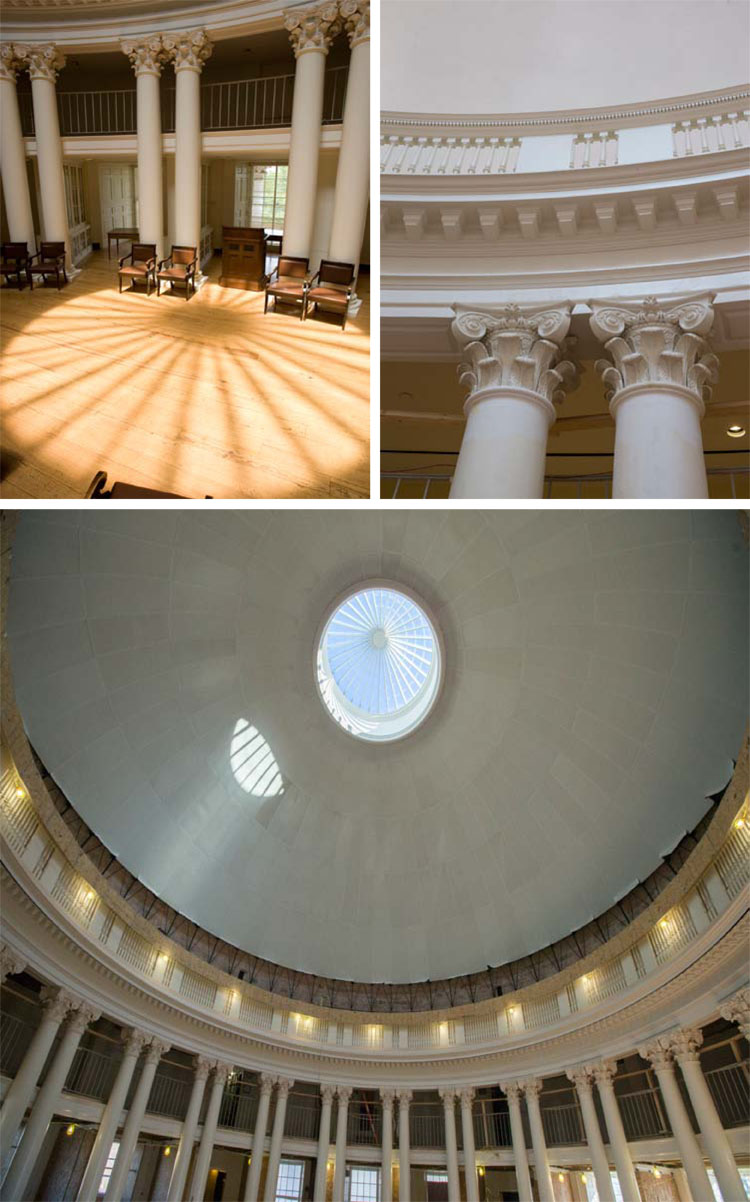 Although the dome of the building was destroyed in a terrible fire in 1895, subsequent reconstruction and renovation has restored the Rotunda to its former glory. Today, the large, central dome room still serves as a library in addition to hosting special dinners and lectures, and the beautiful West Oval Room remains populated by diligent students who flock to the study room’s quiet and productive atmosphere. The Lower East Oval Room is home to an exhibit of Rotunda artifacts, while the Lower West Oval Room serves as a classroom during academic sessions.

Living on The Lawn at UVA 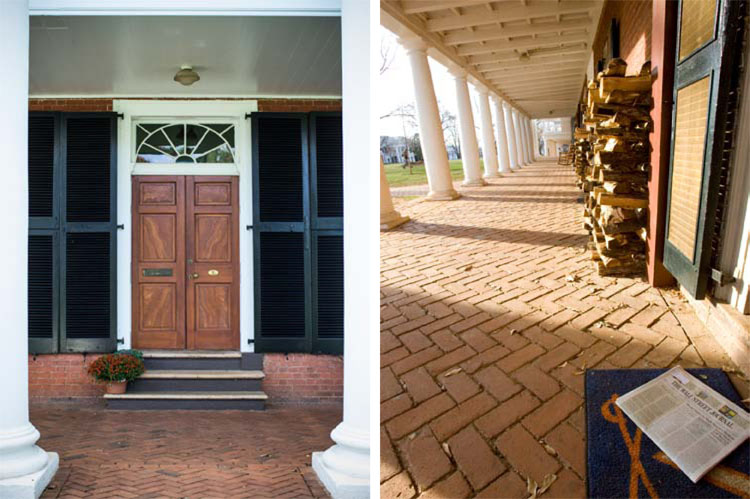 The flanking colonnaded buildings that line The Lawn at UVA were designed to house both students and faculty members in addition to providing classroom spaces for the residing academic community. The large two-story structures that occur intermittently along this flank are known as pavilions and were built to host classrooms on the ground floor while using the second floor as housing for faculty. In total, eight of these pavilions line The Lawn, each one accentuated with unique architectural features in order to showcase a diverse range of classical details. Today, esteemed faculty members still have a chance to earn the honor of living in one of these pavilions, and students have the opportunity to take a pavilion seminar each semester. 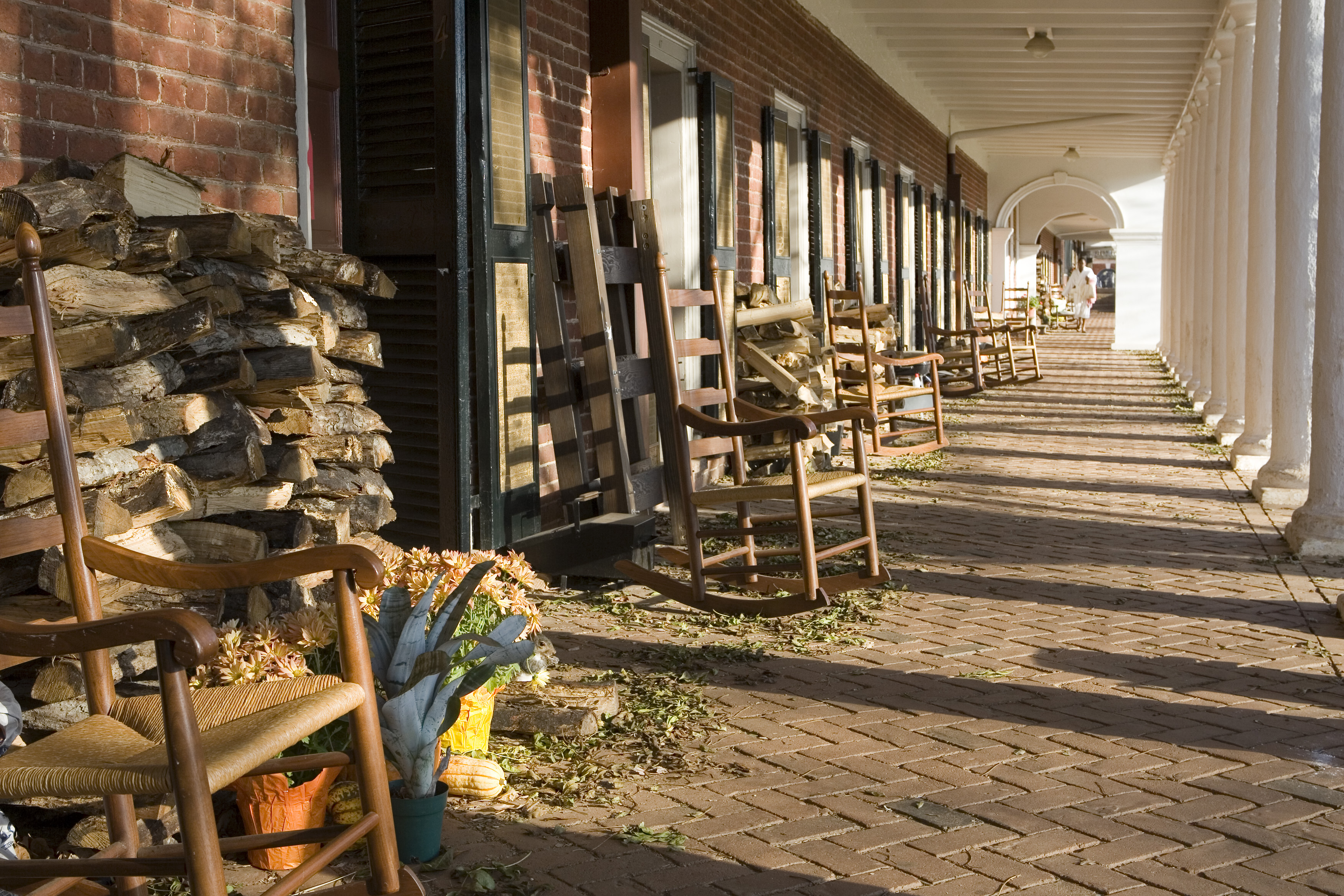 Fifty-four lawn rooms are populated by “Lawnies,” students who undergo a rigorous application process to earn the honor of living on The Lawn at UVA during their final year of undergraduate study. Each room features a bed, desk, sink, and rocking chair that traditionally sits outside the room to welcome visitors.The Ranges, which are the rows of buildings on the sides of the east and west colonnades, were originally built as additional student housing and continue to serve the University by housing graduate students.

Along the West Range lies a room of particular significance, as it hosted Edgar Allan Poe when he attended the University in 1826. Room 13, which Poe called home during his brief time at UVA, has been restored and is available for viewing. Through a glass door, visitors can look at the very quarters in which Poe wrote and recited some of his poetry to close friends.

Art on The Lawn at UVA

At the south end of stands the magnificent sculpture of Blind Homer with his Student Guide, now an iconic symbol that rests proudly at the base of The Lawn at UVA. The bronze statue depicts the blind poet Homer and a young attendant with a lyre, an instrument that has traditionally accompanied the recitation of epic Greek poetry. The statue found its home at UVA in 1907 after the artist who crafted it, Moses Ezekiel, requested that it be donated to the University. Today, it reminds the community not only of Jefferson’s love of the classics, but of his unyielding dedication to creating a space that promotes learning and inspires creativity.

On any given day, you’ll find that The Lawn at UVA is a hub of public activity. From students playing frisbee or picnicking on blankets to families walking their dog, The Lawn is always populated with friendly faces enjoying the beautiful structure of Jefferson’s ingenious design. A new popular activity for students comes in the form of slacklining, in which a person walks across a flat webbing suspended between two anchors. The robust columns and sturdy trees that populate The Lawn make perfect anchors for this activity, and similar to walking a tightrope, slacklining takes balance and concentration. 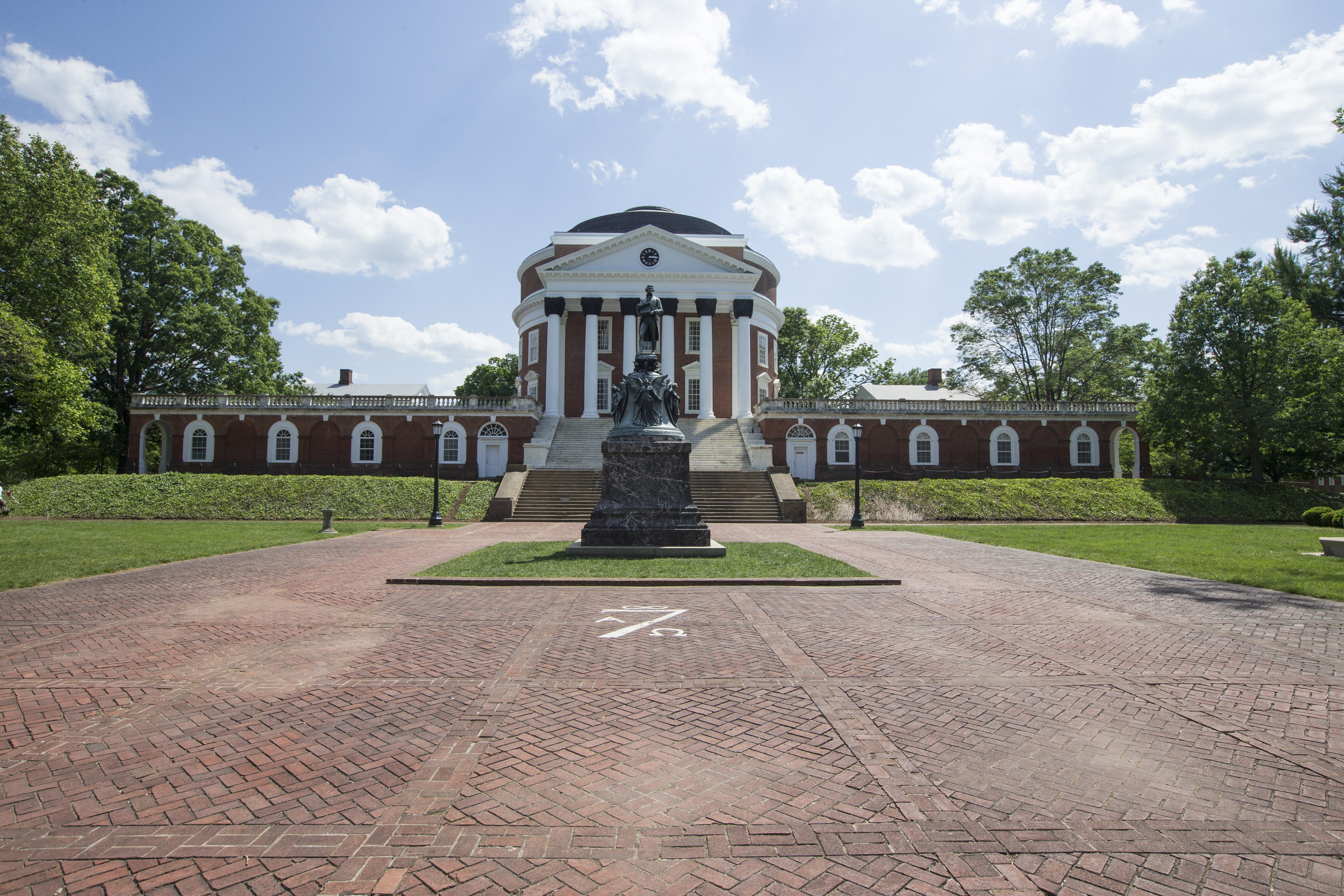 It’s easy to see how Jefferson’s intriguing design has evolved over time, but the founding father’s original plans for the University have always been at the forefront of every renovation, excavation, and reconstruction that has taken place. Today, students, faculty, and visitors alike still celebrate the innovative and brilliant architectural intricacies Jefferson included at his University, reveling in the sheer beauty of the hallowed Grounds Jefferson so carefully constructed. For more information about the incredible architecture of UVA, read Charlottesville Wine & Country Living‘s article about the Academical Village here. ~